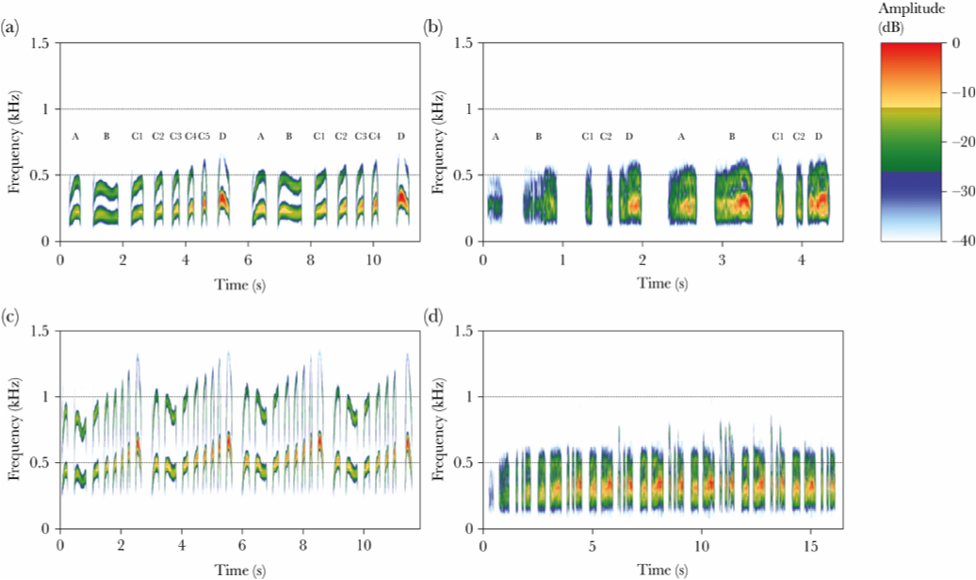 Bird vocalizations are critical cues in social interactions as they convey temporary information varying with the social context, for example, the signaler motivation when facing a rival or a potential mate. To date, literature mainly focused on learning birds. Burrowing petrels (Procellariidae) are nonlearning birds with a limited vocal repertoire. Bachelor males communicate with conspecifics with a single call emitted in three situations: in the absence of a certain auditory (spontaneous calls), toward females (female-directed calls), and toward males (male-directed calls)
Much of the available literature about acoustic variations related to the social context focuses on learning birds, especially passerines, but nonlearning birds have received comparatively little attention, and understanding vocal plasticity in nonsongbirds remains an open question.
In this work, we investigate context-dependent variations in nonsongbirds, focusing on two petrel species: (the blue petrel and the Antarctic prion). We performed the fieldwork on a small sub-Antarctic island within the Kerguelen Archipelago using playback experiments, and we analyzed the vocal responses using a combination of acoustic analysis, supervised machine learning, and generalized regression analysis

Our work shows that conspecifics vocally stimulating a male at the entrance of its burrow induce temporal variations but also frequency shifts in the burrow-owner calls. These acoustic variations differ according to the conspecific sex and are thus likely to convey different motivations, such as aggressive motivation when facing another male and sexual motivation when facing a female.
So far, the expression of motivation in vocal signals has been highlighted in very few nonlearning birds, and this is the first time that a study described spectral variations related to the signaler motivations in nonlearning birds. It opens new leads in the assessment of vocal plasticity in nonoscine species.